And then textbooks took over….

I’m not quite out of the exam-woods yet, but I can see the light at the end of the tunnel. I think that light is actually coming from the fireplace…which is where I will be curled up with a good book once I can read for fun again! If you find yourself with downtime during the holidays, here are some books I’ve enjoyed lately… 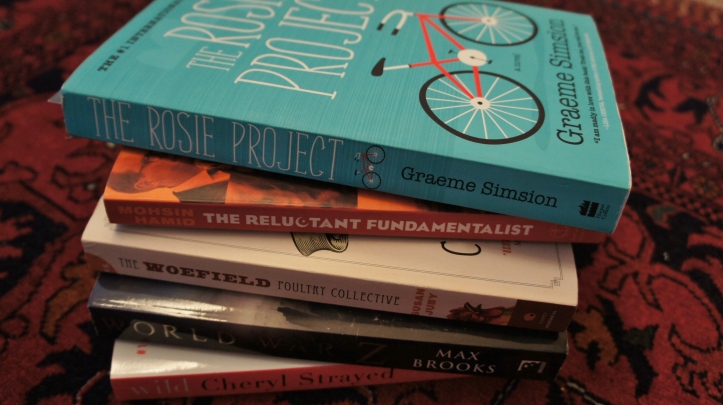 Longbourn, by Jo Baker–‘Pride and Prejudice’ was one of the first “adult” books I read. Like many other Austen-fans, it holds a special place on my bookshelf and is one of my all-time favourites, but I’m not opposed to twists on a classic every now and then (see: P&P&Z). ‘Longbourn’ is certainly a twist, but it can stand on it’s own as a wonderful read and a story with a genuinely engrossing plot. The story is told from the servants’ point of view so you get kind of like a Downton Abbey-esque perspective of the Bennet’s household dramas. This was one of my favourite reads, but if you’re a P&P purist be warned that you might never look at Austen’s characters the same way again!

World War Z, by Max Brooks–In what is a total departure from the things I usually read, I found WWZ to be completely compelling. It’s written in such a way that I totally believed the events and the aftermath of the zombie epidemic/apocalypse. Creepy, but well written.

The Rosie Project, by Graeme Simsion–For some reason both my mum and I had a hard time getting Sheldon Cooper’s voice out of our heads while we read this one. Our protagonist is brilliant and socially-awkward, and looking for a wife. The story is silly, heart-warming, and made me want to practice mixing cocktails.

The Reluctant Fundamentalist, by Moshin Hamid — Thought provoking. This is a small book but it packs a punch; I raced through this one.

The Woefield Poultry Collective, by Susan Juby — A quirky Canadian read full of even quirkier characters. Sometimes the silliness seemed in danger of drifting towards corny territory, but it was a fun read with a super keen environmentalist protagonist and it’s hard not to root for a happy ending.

Wild: From Lost to Found on the Pacific Crest Trail, by Cheryl Strayed — The author’s story of her (cathartic?) solo trek along the Pacific Crest Trail (which at times made me nervous!) and the events that led up to her weeks of hiking is intense. Whether or not you enjoy her story, it might inspire you to think of the things we are capable of doing on our own. It reminded me a bit of Eat, Pray, Love (which I did not love), but grittier and more authentic.

I’d love to know, what have you been reading? xo K