Coming Up: A Taste of the Arctic

My lunch break yesterday was a departure from my regular sandwich or salad. Instead, I sampled pitsi and maktaaq and tuttuminiq quaq.

…Intrigued? Then you might want to check out A Taste of the Arctic! (That’s dried Arctic char, beluga skin, and raw caribou, if you were wondering.)

As I munched on (more than a few) pieces of candied Arctic char, I watched as meat was expertly  sliced with sharp ulus, traditional Inuit made blades, and learned more about Inuit culinary customs (apparently the eye of the fish is a treat that people fight over!).

Bannock, the quintessential bread, was the only food on offer that was familiar to me, but I was pleasantly surprised by all the new things I tried. One of the ulu-yielding women drew similarities between the raw fish and meat we were eating and Asian sushi, something that doesn’t seem so unfamiliar. Raw, smoked, dried, candied, or frozen, it was neat to see fish and meat prepared in so many ways on one table. (The most traditional way being “pulled straight out of the water and served” I was told — talk about catch of the day.) 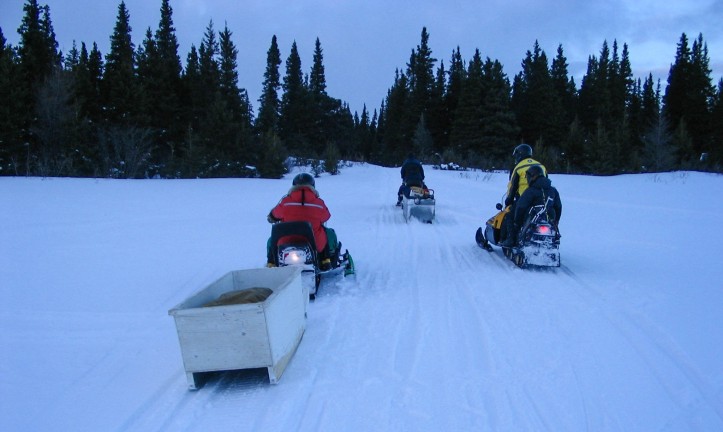 Yesterday’s lunch was only a preview for the main event, A Taste of the Arctic, that will be happening Monday March 7th  at the National Arts Centre. Featuring contemporary dishes created around the fish and meats that were sampled yesterday, as well as other uniquely Arctic ingredients, the food is all prepared by the NAC’s talented chefs. (The pitsi, dried Arctic char, was so popular in the NAC kitchen that it has even appeared on the daily menu.)

Along with the food, northern culture and music–from Inuit-inspiredelectronic beats to an Arctic soul band from Iqaluit — will be showcased. The event is being put on by Inuit Tapiriit Kanatami (ITK), the national voice of 60,000 Inuit living across communities predominantly in Northern Canada.

Sounds like this might be up your alley? Use the promo code 2016-FriendsFamilyRate50 when you purchase your ticket to get 50% off. Hope to see you there!

(I’ve never been quite as north as the Arctic, but I did follow my Dad up to Chisasibi once 10 years ago when he was going up for a regular work trip. My week there included a trip out to Dead Duck Bay were I didn’t catch any fish, and I definitely didn’t try the only one our group caught raw… I guess my taste buds have become a little more adventurous!)